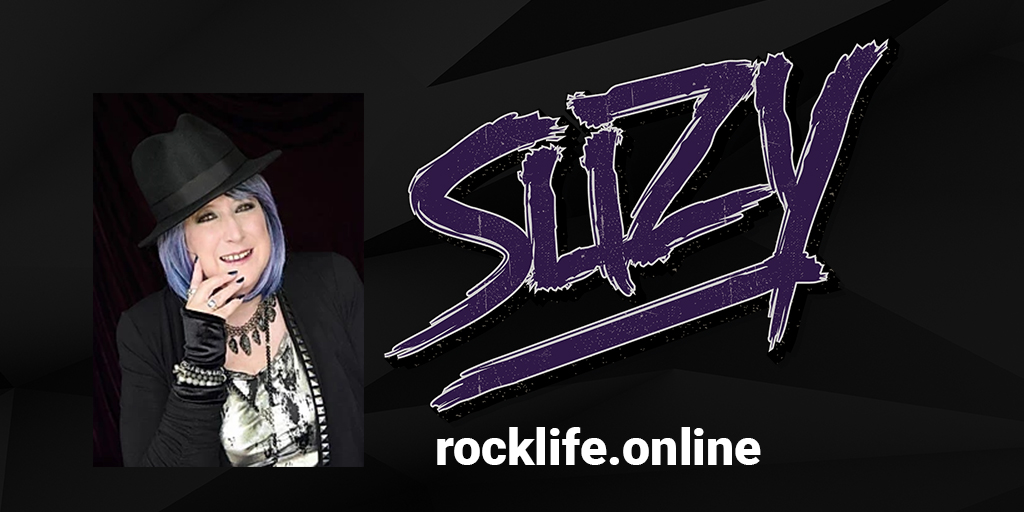 Suzy on never giving up on your dreams

Growing up in a small Mississippi town, Suzy was discouraged again and again from following her dream of pursuing a singing career, instead winding up in a 30-year PR/advertising career.

After attending Rock and Roll fantasy camp a few years ago and sharing the stage with the likes of Paul Stanley (KISS) and Rob Halford (Judas Priest,) she finally found encouragement from camp counselor Joe Vitale (The Eagles, Joe Walsh,) who became her mentor and helped her get started on the path she was meant to be on.

Now she has just released her second self-titled EP, a five-track set of melodic metal that is produced by Billboard-charting artist/producer Norman Matthew (As Strange As Angels, Murder FM) and includes Vitale and Ace Frehley drummer Matt Star on selected tracks.

Rock Life caught up with the singer recently as she talked about the long road to get here.

Q: You’ve been working with Norman Matthew. How did that come about?
Suzy: Well, I met Norman about five or six years ago, but it seems like even longer. I don’t remember exactly how we met, but I believe his band played at a event that I helped organize and manager and I believe that’s when we first met. I found out he lived in Texas and whenever I find out there’s someone else from there I definitely want to to talk to them!

So I started going to see Murder FM whenever they played here and going up there to Norman and when I finally finished my first EP and was over and done with that, I started looking around for somebody new to work with because none of the previous people had worked out well. So Norman was one of several people I called to get recommendations from, but not to work with. I wasn’t looking to actually work with any of them, but just to get some suggestions on people they’d worked with and Norman was the only one who wouldn’t give me any and instead told me that I should work with him. I kept telling him he was too busy, but he finally did convince me that he was the right person. Turns out he was correct about that, but I was also right in that he is crazy busy, but we’ve made it work! It’s been a lot of fun working with him.

Q: And can you talk about how the new music has been coming together?
Suzy: Well, slowly! [laughs] Like I said, Norman is rather busy, so it’s slowly coming together. Some of the songs on the current EP came pretty quickly and some of them have taken a lot longer time. The song “Road To Nowhere” my friend and mentor Joe Vitale, who played with Joe Walsh and the Eagles and various other groups played everything except guitar on that song. I was really excited to have him as a part of that. That was pretty amazing.

Q: And what was it about the “Tomorrow” track that made you want to release that one first?
Suzy: It was more about the music video for that one. I thought that one would catch a lot of attention. The characters in the music video are a person wearing a dog head and a girl wearing a bunny head and it’s a little different for sure. I thought that might keep people’s attention. so I thought we should go with that one first. The other ones have a lot more traditional music videos.

Q: Is that something that happens when you’re writing songs, seeing them visually I mean?
Suzy: Not really in terms of a music video. I’m always kind of painting a picture in my head that I hope other people will be seeing as well; something similar or maybe even something completely different that works for them. You want people to have some kind of a visual response to the song as well as a emotional one. You just always want it to be something they can relate to.

Q: What do you want people to know about your music?
Suzy: That’s hard to say! I want them to know that it’s not acoustic because I don’t know what it is, but people who don’t know me seem to think that I’m a acoustic singer/songwriter kind of music. I do what I refer to as melodic metal and some people might also refer to it as alternative.

Q: Do you feel that the fact that you’re coming into this music later in life after a career in PR has helped you navigate things or given you a edge that others may not have?
Suzy: I really do think so. I think that probably even though I would have liked things to come together sooner, I don’t think that I was in the right place until a few years ago. Definitely when I was younger all the crap that I went through doing the first EP wasn’t something that I think I would have been able to deal with. I wouldn’t have those skills to deal with it. Like you said the writing and PR experience and even the life experience gives me more to draw from than I would have had a lot earlier.

Q: And what made that change in you to want to pursue it again?
Suzy: Well, I really had given up on music as a part of my life. I had grown up in a small town singing any time and any where that any one would let me. Then when I moved to Houston in 1980 I figured I was somewhere there were actually clubs and bands and it was a place where I could actually do this, but I didn’t know anybody there yet and my family was not very encouraging. They were definitely less than supportive. I decided that maybe they were trying to tell me something, but didn’t want to hurt my feelings. Maybe I just couldn’t sing. So I kind of just walked away from all of it.

In the nineties I was going to a lot of concerts and live shows and being around music and musicians and then over time I talked to musicians that I knew and they said well you used to sing and you are a writer so why don’t you write songs? I had never really thought about it and I didn’t know how to write the music part of it. I could read music and play the piano very badly, but I didn’t know how to put together a song and had no music theory training. That’s where people like Norman came in and helped me out. I started thinking I would try it out and I knew a lot of musicians so I started on the first EP and went through 5 or 6 different producers and none of them really worked out that well. So at one point when I thought it was going to be done and have something to show for all the money and years I’d put into it, it just didn’t happen. I figured the universe was telling me that I shouldn’t be doing this.

That’s when I got a email from Rock and Roll Fantasy Camp saying they were doing their first ever song writers camp and part of that process was to look at the songs you had written and give you a critique of the songs. I decided okay, I’m going to go and if they think I should pursue this then I will and I guess fortunately Jim Vitale was the counselor and was very encouraging and a great mentor since then. He told me I should definitely keep working on it. I found someone and salvaged what we could of the first EP and got that out and then after that is when I got in touch with Norman and the others.

Q: Coming from such a small town, how did the idea of being a musician even originate?
Suzy: Even though my family wasn’t musical at all, my parents loved to dance and they would have parties at our house or they would go to their friends and they would all take their records. So these parties had all this amazing music like Frank Sinatra and Dean Martin and I grew up listening to that. I don’t really remember ever not singing or loving music.

Q: You’ve gotten to work some big names in music, what do you feel is the best piece of advice you’ve gotten?
Suzy: Well, I’ve gotten a lot of advice, but mostly just to stick with it. That and just be true to yourself.

Q: What’s next?
Suzy: Well Norman and I are working on the new music and we will have videos coming out for the five tracks on the new EP.